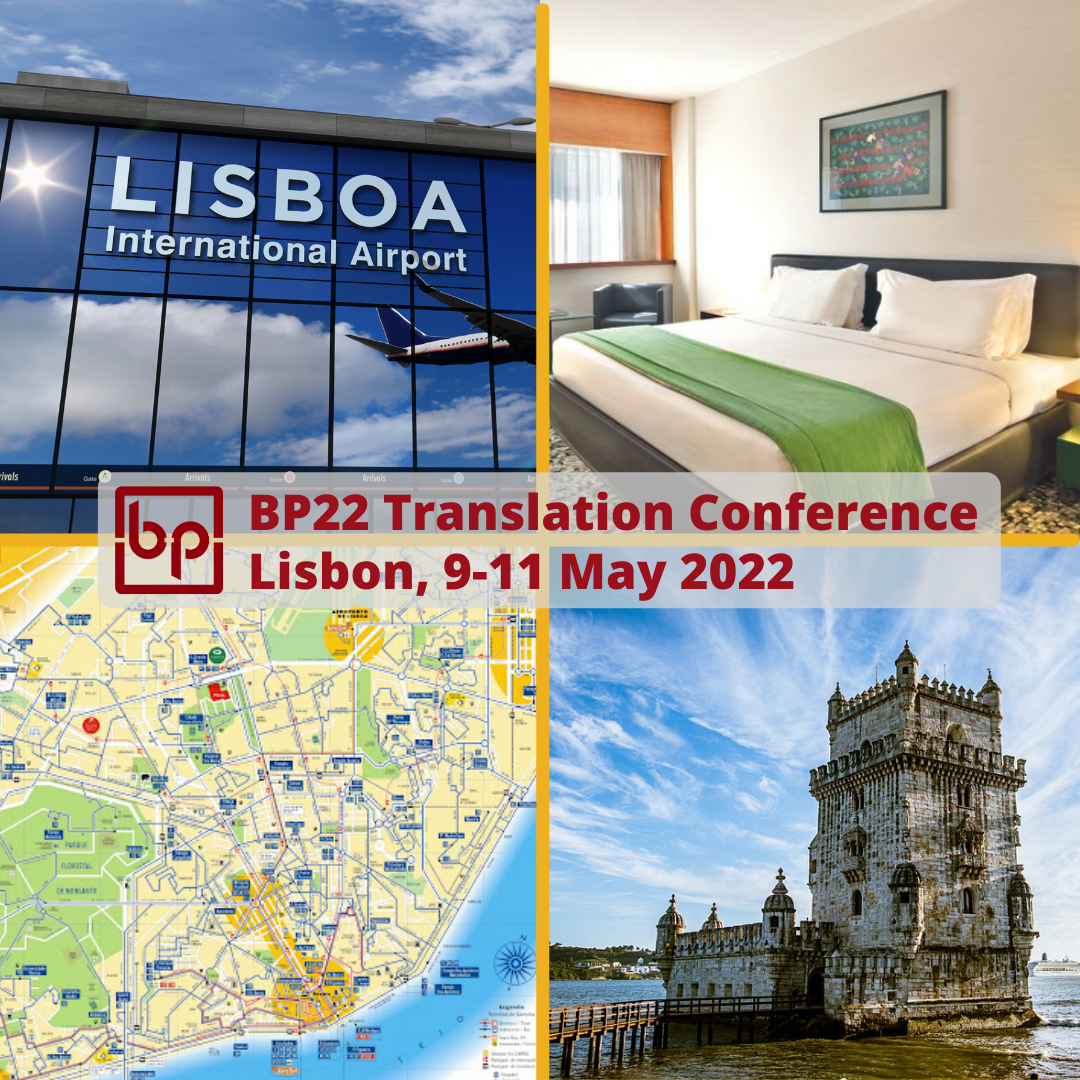 Lisbon is very well connected by direct flight routes to a wide range of cities in Europe, as well as North and South America and Africa.

Here is a zoomable map of cities with direct flights to Lisbon.

This Wikipedia article lists many additional cities as well, where direct flights will start or resume in the near future.

It’s worth signing up to your airlines’ mailing list, to be notified of any special sales that are usually available for a short period only.

Lisbon’s airport is centrally located. For a few years now, there’s a direct metro line right from the airport. In fact, it’s very easy to reach the conference hotel – you’ll need to get off at Olaias metro stop, and the hotel is right there.

Alternatively, you can reach the hotel with a short taxi ride.

Get a 10% discount when you book your airline ticket directly with TAP Air Portugal on their website.

The offer is valid for return flights between 30 April and 20 May.

Details of the offer in the attached pdf file, where you will also find currency-specific discount codes.

Please note that the discount codes still need to be activated by TAP Air Portugal. 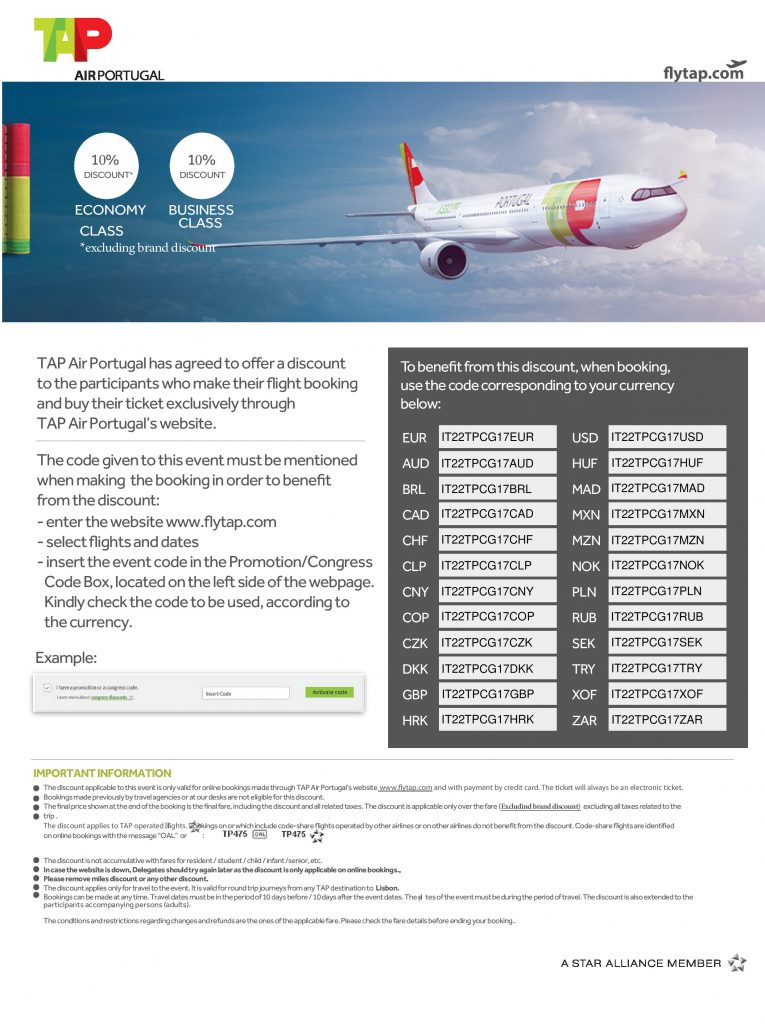 Although flying is definitely faster and in most cases also cheaper than land transport, from come cities a bus connection may be a better option.

Flixbus operates a number of long-distance routes to Lisbon, mostly from Portugal and Spain, but there are also direct buses from as far afield as Paris, Zurich, and Nice.

The Flixbus terminal is at Oriente station (an architectural marvel by Calatrava), from where it’s a short metro ride to the conference hotel.

Other bus companies may also operate long-distance buses from other cities. 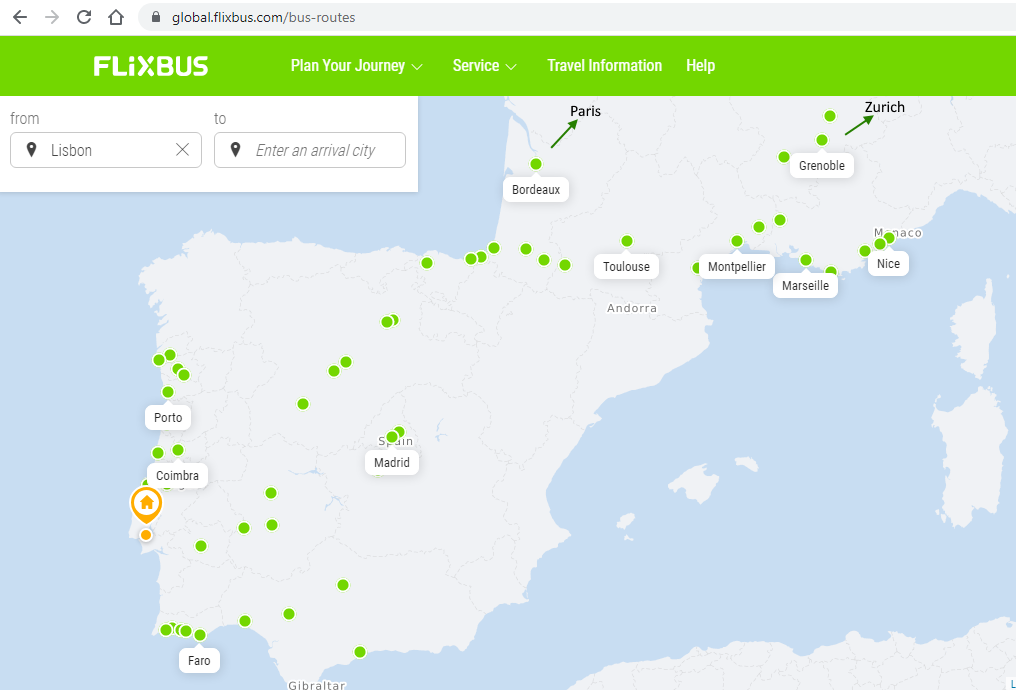 If you need a visa to enter Portugal, you may need to present an invitation letter together with your visa application.

As a first step, check out this website (Portuguese Ministry of Foreign Affairs) to find out if you need a visa, and where do you need to apply for a visa.  Ask at the relevant embassy or consulate if you need to submit an invitation letter from the the organizer of an event you wish to attend.

BP Translation Conferences, as the event organizer, can issue such an inviation letter, from January.   Only genuine applications will be supported.

You may need to submit your visa application well in advance.

Please note that we cannot take any responsibility in case your visa application is rejected.  What we can do is giving you a refund amounting to the difference between what you paid and the price of the ‘Remote Premier’ ticket at the time of you informing us about your visa rejection.

Our conference hotel, Ramada Wyndham is the most obvious choice to stay. Conveniently located halfway between the airport and downtown, and easily accessible from both in about 15 minutes by metro.

You can book rooms directly on the hotel’s website using the group code LBP2 under the Special rates section.  The special rate is 120€ for a single or 130€ for a double, including breakfast (+2€ city tax per night per person).   This rate is currently valid between 6 and 14 May.  One night is charged at the time of booking, and you’ll get a full refund if you cancel your booing up to 72 hours in advance.

For any questions regarding hotel rooms, please write to reservations@ramadalisbon.pt

You may find cheaper rates with different terms on the hotel’s website or on Booking.com, so it’s worth shopping around.

Lisbon has a vast range of hotels of all shapes and sizes, as well as holiday apartments.   If you can find 3, 4, or even more people staying together, renting a holiday apartment for your stay will turn out to be much cheaper than in the conference hotel. When selecting a place to stay, bear in mind that the conference venue is at metro stop Olaias on the red line.

Other neighbourhoods with easy access to the hotel are around metro stops Alameda, Saldanha, and São Sebastião. All of these are along the red line, 1, 2, and 3 stops away from Olaias.  There are also direct metro lines to downtown from Alameda (green) and São Sebastião (blue).

If you wish to stay in the centre, take the green line until Alameda, then change to the red line for one stop until Olaias.

Once the app becomes active in February, we’ll have a forum where you can discuss room sharing.

Lisbon has 4 metro lines (including one that connects the airport with the conference hotel), an extensive bus network, and a handful of tram lines.

A single ticket costs 1.50€, available at vending machines at metro stops and some other places around town.  On your sightseeing days you’ll be better off with a day pass. First you’ll need to buy a white ‘Viva viagem’ card at a vending machine for 0.50€, then you can add a day pass for 6.40€. This is valid for 24 hours for an unlimited number of rides on any metro, bus, tram, and even funicular. (That is, in Lisbon proper. If you stay south of the river, you’ll need a green Viva viagem card.)

The conference hotel is at metro stop Olaias on the red line. From here, change at Alameda to the green line to reach the centre. Useful stops include Rossio,  Baixa/Chaido, and Cais do Sodré.

If you get off a bit earlier at Intendente, you have a better chance of catching tram 28 without a crowd.  Or, from Martim Moniz you can also catch tram 28 or tram 12 to get to the thick of Alfama, the old neighbourhood with meandering streets between the castle and the river.

Rossio is useful to reach the venue of our gala dinner or for catching a train to Sintra (from Rossio train station), and it’s also the closest metro stop to the lower end of the iconic Santa Justa elevador.

Get off at Baixa/Chiado to sip a coffee at A Brasiliera, or at some other café nearby, while listening to some street performer.  This is also the neighbourhood to shop for high street fashion brands. Barrio Alto (‘upper district’), with its hip (or sleazy?) bars also starts from here.

The terminus, Cais do Sodré, is useful to hop on tram 15 on the way to Belém, to catch a train to Cascáis, or to visit the Time Out Market just across the tram stop.  The lower stop of funicular Bica is also in this neighbourhood.

Taxis in Lisbon are quite affordable, especially if 2 or 3 of you share a ride. A typical ride (e.g. from the airport to the conference hotel, or from the hotel to the Baixa neighbourhood) will cost you around 8 euros.  The meter starts at 3.25€, and each kilometer costs 0.47€.

Uber is slightly cheaper than taxis, but be aware than Uber cars are not allowed to stop at the airport terminal.

There’s a taxi rank about 200 m from the hotel, and the hotel can order a larger number of taxis in a short time when necessary, for example before the gala dinner.

As usual, beware of scams.

We are looking for a local colleague with good writing skills to write this section.

You’ll need to research and write about public transport, taxis, emergency numbers, medical assistance, a language section, insider tips, etc. Anything that attendees from outside Lisbon will find useful before and during their stay.

We are looking for one suitable candidate to write this section and the next, in exchange of free attendance at the conference and the dinners.

Contact us for more info (and convince us why you’re the ideal person for this task).

We are looking for a local colleague with good writing skills to write this section.

You’ll need to research and write about the most well-known and some of the less obvious sights, some shopping tips, unique experiences, and so on.  Most attendees from outsie POrtugal will most probably spend at least a couple of extra days in Lisbon, and some people may even combine BP22 with a trip around Portugal, so some tips for day trips are also welcome.

We are looking for one suitable candidate to write this section and the previous one, in exchange of free attendance at the conference and the dinners.

Contact us for more info (and convince us why you’re the ideal person for this task).

and our other valuable collections

:: Add our other collections for free (workshops/Spanish sessions) ::

:: Contribute to the costs of running BP conferences ::

(Or an equivalent discount off a physical attendance ticket. 1/100 chance. )